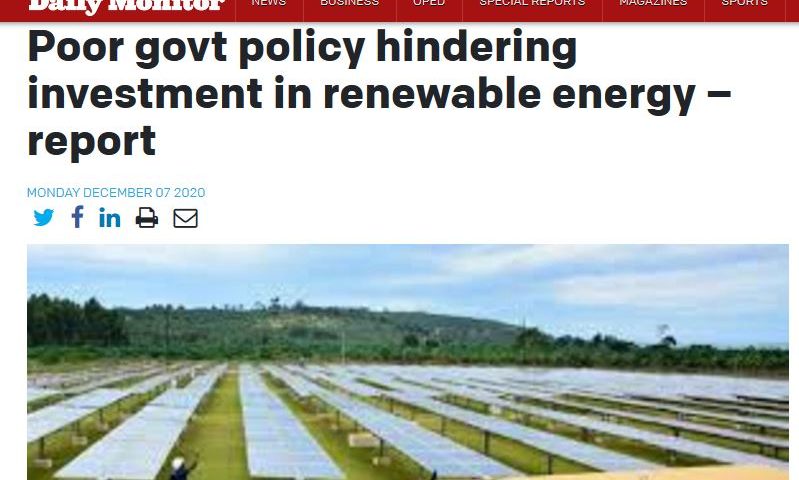 Inadequate government support and limited financing from commercial banks, among others, are hindering the private sector from investing in renewable energy, a new report has revealed.

Renewable energy, often referred to as clean energy, comes from natural sources or processes that are constantly replenished such as solar energy and biogas.

Dubbed, ‘Financing Mechanisms for Private Sector Investment in Renewable Energy Access in Uganda,’ the report shows that renewable energy is a profitable venture for investors as well as saving the environment.

However, it indicates that the government does not provide the incentives in form of taxes, electricity subsidies and other sources of financing to attract the private sector to invest in renewable energy sources.

For instance, the report shows that 65 percent of renewable energy companies in Kampala and 85 percent of those upcountry did not know any funding opportunities in Uganda.

The report is in regard to the project titled, ‘Increasing access to sustainable and renewable energy alternatives in the AlbertineGraben’ that is implemented by World Wide Fund-Uganda.

The report shows that Uganda has found it challenging to utilize many of these renewable energy resources and to ensure the energy mix to accelerate energy access.

“Increasing access to electricity will require a sharp increase in energy access investments. Since public funds are limited, the necessary investments cannot be made by the government alone. Therefore, the mobilization of private investment and finance is crucial,” the report adds.

While launching the report on Friday, Dr Joshua Zake, the Executive Director of Environmental Alert, revealed that apart from inadequate government support, private sector players face higher foreign exchange risks when sourcing international funds and that despite availability of financial instruments to hedge the risk for commonly traded currencies, some borrowers are unwilling to provide the same instrument for currencies traded less frequently.

“The small scale of many renewable energy projects creates significant problems in obtaining international private financing. The sums of finance often required by the projects in their start-up phase are often too small for mainstream investors and banks. The transaction costs of funding many small projects are high because of the due diligence and bureaucracy involved,” he quoted the report, revealing that typical due diligence costs for larger projects can be in the range of $ 0.5 million to $1 million.

Dr Zake however, said that the report, enlists key financing sources that can be tapped to invest in renewable energy by the private sector.

“The report findings and recommendations have helped us to clarify the actions and what duty bearers should do towards the implementation of the study in as far as accessing financing for renewable energy by private sector is concerned,” he said.

In response, Mr John Bosco Tumuhimbise, the Assistant Commissioner in charge of renewable energy at the Energy ministry, admitted that the low level of development and modest contribution of modern renewables are a result of several barriers and challenges which are economic in nature.

“These barriers are financial, fiscal and socio-economic. Investment in renewable energy must compete for resources with other projects whose risks may be lower but also offer better returns on investment. Renewable energy tariffs usually do not factor in other non-monetary benefits such as improved health, reduction in harmful emissions, environmental sustainability and ecosystem services,” he said.

“Investments in low-income energy markets like in Uganda are often longer-term, higher risk, and generate a lower financial return. Commercial investors may be unwilling to spend time building the relationships and market demand required to generate a decent return, requiring more ‘patient’ forms of capital instead,” reads the report.

Uganda is among countries with the lowest electricity access rate; over 93% of the population relying on biomass for energy.